Today’s players demand more in a computer game than previous generations ever did. That being said, there are some excellent real time strategy games that players just can’t get enough of in 2018.

Far from a new release, Command & Conquer is a series of games that have become popular this year. It’s versatile enough for one player to enjoy it alone but also supports multi-player gaming action. The goal of the game is for players to successfully collect resources while also constructing defence structures and training their units to prepare for battle. This highly rated game has stood the test of time since its release.

Another popular series of computer games is The Age of Empires. The third in the series of games has been praised for its choice of fourteen empires as well as for its historical accuracy. The game includes countries that really exist, something most other games can’t claim. Players can use samurais based on real life people, making Age of Empires a more out-of-the-box game than their competitors. The game begins with players fighting their way through the dark ages, requiring them to perform research on various technologies and their development. Players then get to open routes for trading, making the game even more relatable to real life. They then have the opportunity to build an Army and send it into Asia and Europe to take over certain parts of both countries. This slow paced game is perfect for players looking for an ongoing adventure.

One of the more visually appealing real time strategy computer games is Supreme Commander. The spatial abilities of the game mean that players can get an aerial view at 180 degrees, a feat not every computer game can achieve. This game is a very intense experience that is not ideal for every player. It is a fast-paced game in which players shield their armoured command unit all while creating armies and racing to acquire needed resources. Players are faced with decisions about looking for new troop members to train and learning more about the latest technologies that may be able to help them in their battle. 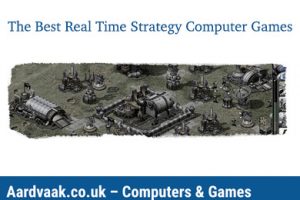 An intense computer game that has become popular is Company of Heroes. Set during the days of World War II, it does much to capture the history of that period in time. While it is extremely realistic it is also an easier strategy game than most others.

After the success of the StarCraft computer game, released in 1998, StarCraft II is a one player or multiplayer game with more than 70 missions to be completed. Players have three campaigns to choose from and can even choose to try arcade modes created by others. This fast-paced game is designed to be one that leaves players with a sense of urgency to complete its missions.

These are just some of the best real time strategy computer games on the market today. They are all suitable for general audiences.